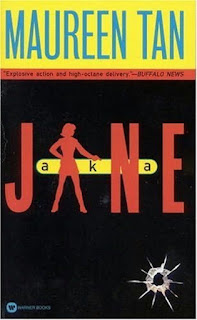 Jane Nichols #1: “A.K.A. Jane” by Maureen Tan. Janie Nichols works for MI-5 in Her Majesty’s Secret Service (hoping to capitalize on the James Bond books). During one assignment a red haired man, later identified as Jim O’Neil, kills her partner/lover. The first 100 pages cover her early missions and backstory. At which point she resigns to concentrate on writing a series of P.I. stories featuring her character, Andrew Jax and his secretary Millicent Jones. Her publisher pays her travel and expenses to America to promote her new book (I mean they go all out, paying hotel, Bread & Breakfast, and finally setting her up in a private home. Plus giving her a car rental, fully funded – wow!), and accompanied by her agent, no less. While there she sees the red haired killer and decides to take him out. The following two hundred pages now cover this segment of the story. Curiously, a few years ago I reviewed a Cozy Mystery novel with a similar plot to the final two hundred pages. Though this isn’t a copy of that story I think we can classify it as a Cozy Spy yarn rather than a men’s action novel. The writing is good, and the characters are interesting. However, readers looking for a fast action novel, they won’t find this a page-turner. But it is an interesting novel, and readers of Cozy mysteries will certainly like it.
Posted by Tom Johnson at 9:10 AM