Prolog To Jur: A Story of Pre-Dawn Earth 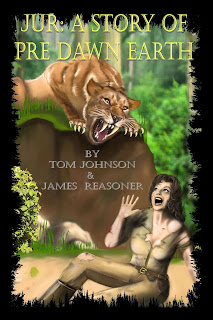 PROLOGUE
My uncle once told me that one could not believe the stories that one hears in bars. Perhaps he never heard the right ones.
It was in Paris that I first met the man who told me this part of the story. I don’t remember the name of the bar. It was a small place on the Left Bank, and I had wandered in there late one morning feeling stale and bleary-eyed after only a couple of hours sleep. The night before had been spent trying to prove to myself that there was still a magic about this city, something that had been in the air when Hemingway and the others made it their city, sixty years before…something that would allow me to recapture the success of their efforts. I had been there six weeks, seen all the sights there were to see, made the acquaintance of several very friendly young women, and done not a damn thing that was worth anything.
That was why I was in the bar, sipping a beer and trying to decide whether to pack it in and go back to the States when the tall old man came in, pausing just a moment in the doorway to let his eyes adjust to the dim interior.
I didn’t know he was an old man then. He was a tall man, dressed like an American, who moved with sure, easy steps to the bar and ordered a cognac in what sounded like flawless French. At least it sounded that way to my untrained ears. It was only when he turned around and put his back to the bar that I got some idea of his true age. His hair was silvery, and his face had the weathered, seemed look of a man who had spent almost his whole life outdoors. There was no trace of his years in the way he walked quickly across the room toward the little table where I sat. I looked up at him in surprise as he approached me, wondering what had drawn him to come over to my table. Perhaps he just wanted to talk; there were few patrons in the bar at that hour, and I might look like the most promising to him.
“Hello,” he said in a quiet, controlled voice. “You look like an American. Mind if I sit down for a few minutes?”
Up close, I was struck even harder by the contrast between his aged face and the athletic body of a much younger man. I said, “Sure, have a seat. You’re right. I am an American.” I extended my hand across the table with its checkered cloth and introduced myself.
He returned the handshake, clasping my hand in a strong grip. Something about it told me that the force he exerted was only a fraction of what he was capable of. He said, “Glad to meet you,” but I noticed that he didn’t return the favor of giving me his name. Well, another thing my uncle told me about bars was to never ask a man a question that he obviously wouldn’t want to answer.
“I suppose there are a lot of Americans over here, but for some reason I don’t run into very many of them,” he went on.
“There are quite a few American businessmen in Paris,” I said.
“But you’re not one of them, are you?”
I had to smile. “I don’t know how you knew that, but you’re right. I’m a writer...or at least I’m supposed to be.”
He sipped his drink. “Having trouble with it?”
I shrugged. “Some. I suppose all writers do. Still, I’ll stumble across the right idea sooner or later.”
“Ah, eternal optimism. I like that. Why are you sitting in this bar, though, instead of being somewhere writing?”
Coming from someone else, I might have resented the question. Something about this strange young/old man, though, kept me from even coming close to losing my temper. I sensed a real interest on his part, so I said, “I’ve been writing. All night, in fact. And it was a bunch of damned hopeless garbage. I don’t know what causes it, but just once I’d like to write something that wasn’t so bleak and depressing.”
“Maybe you think life is bleak and depressing. They say writers write what they know best.”
I shrugged and swallowed some more warm beer.
He was looking intently across the table at me, a frown on his lined face. After a moment of silence, he said, “Maybe you just haven’t lived long enough, my friend. You haven’t discovered yet just how many wild, wonderful things are possible.”
I thought back on my life so far and couldn’t remember anything wild and wonderful. There had been some good times, but none of them had lasted.
The man said, “Listen, I’ll give you an example of what I mean. I’ll tell you a story, just off the top of my head. I’m no writer like you, but I’ve lived a long life, and I’ve got an imagination. If I can tell a good story, just think what you can do once you’ve lived a while longer and opened your mind up to all the possibilities.”
“We haven’t heard the story yet,” I said, a trifle rudely.
“That’s true,” he smiled. “Well, let’s see. We have to go back a bit, to an earlier day when adventure and romance weren’t as rare as they are today...that’s a good way to start, don’t you think?” 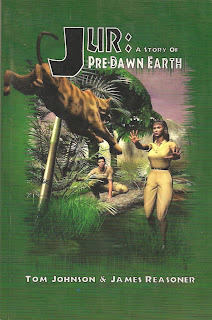 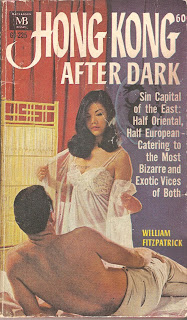 “Hong Kong After Dark” by William Fitzpatrick. I bought this thinking it was a fiction novel set in Hong Kong, as I tend to like Hong Kong stories, but it turns out this is a history and guide not only to Hong Kong, but Canton, Taiwan, Macao, and Mainland China. In fact, authors who wish to write stories set on the Pearl River, and these areas, should read this book first to get the feel of them, and especially the night spots and ladies of the evening. It’s an interesting book. The author lived in Hong Kong for several years while working with a company dealing with the Orient and the Chinese. During this period he sampled plenty of the merchandise, and explains the business first hand. Not a bad history, and the novel is fairly mild, and a bit humorous at times.
Posted by Tom Johnson at 5:03 PM 1 comment: