Of Other Days And Other Spiders 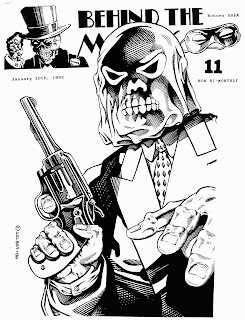 OF OTHER DAYS AND OTHER SPIDERS

It was 1933, almost 90 years ago. To some, it was a long time ago. To others, the year is a memorable time in their own past history. True, the old timers are fading away now, but a few still remember the year, as do many of the young readers – the fans of the pulp heroes. It was the year Doc Savage began his long, adventurous life in the pulp magazines. There were other great heroes joining him that year: The Phantom Detective, G-8 And His Battle Aces, The Lone Eagle, The Moon Man (TEN DETECTIVE ACES), Nick Carter (in a new resurrection), Pete Rice, and The Spider, to name just a few. These larger-than-life hero characters were a resurgence of the older DIME NOVEL characters of the previous century.
The pulp hero magazines, or single character pulps, as a lot of folks prefer calling them, had actually begun in 1931 with The Shadow. But it is 1933 that will give the magazines their most forcible push. It was the year of Doc Savage, the beginning of the heyday of the pulp magazines that would last for the next twenty years. Please forgive me if I sound like I have a slight case of nostalgia. I probably do. But this is a special period, 1933 to 1953. Twenty years of the greatest fictional heroes of all time. We may never see their likes again.
One character magazine that appeared in in October 1933 was The Spider, and featured a hero of gigantic stature. But this article is not about him. However, following the debut of that hero, two months later, December 1933, was a novelette titled, Spawn of The Spider by Frederick C. Painton (ALL DETECTIVE). It might be noted that Mr. Painton had numerous short-lived series running in the pulp magazines, but Spawn of The Spider and its sequel, Spider’s Return in March 1934, is memorable because this Spider is a super crook! 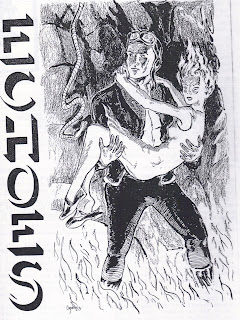 Fortunately, we do have a hero to fight this super villain, and maybe we should first take a look at this shining knight before looking at the dastardly villain. So, without further ado, our hero is … Captain Gary Galt; he is lean in body, with a bronzed face, and a shock of yellow hair. He is also a master of disguise, a dead shot, and speaks five languages fluently. And what’s more, he has the cleverness of the devil himself.
In Spawn of The Spider, we learn that Captain Galt, a U.S. Secret Service agent, while assigned to the Middle East, and attached to a big American oilman by the name of A. P. Hargrave, is framed for a crime and imprisoned in France for twenty years. However, Captain Galt soon escapes and plans to get even with Hargrave, whom he believes double-crossed him.
Galt is on the same ship as Hargrave, who is returning to America. Our hero decides to break into Hargrave’s cabin and steal his valuable diamonds from the safe. But while he is in the act he is caught by the beautiful Lura Tellaire, the mysterious woman employed as Hargrave’s secretary.

“ ---Leave if where it is, Captain,” said a soft, feminine voice. “I can kill you easily at this distance.”

He squinted his eyes in the direction of the speaker. There, in negligee and scarlet pajamas stood Lura Tellaire, A. P. Hargrave’s confidential secretary.
She was a beautiful woman, no doubt of that. Her black hair fell in waving folds on each side of her olive face. Her long, narrow eyes – almost Chinese in their effect, he thought – were heavy lidded and alluring. Her tall, slim body was perfectly proportioned, and her full red lips had a soft, seductive appeal. She smiled now lazily at Captain Galt’s obvious chagrin. 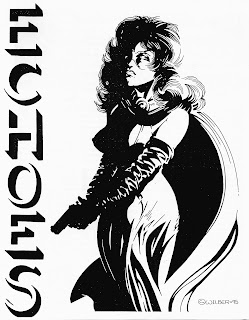 But instead of turning him in, she offers to become his lover, and promises that if he joins with her, she would lead him to more fortune than Hargrave’s mere diamonds. Galt agrees to play along with her to discover what her game really was. However, he has no plans on becoming her lover – you see, he has all ready fallen in love with Hargrave’s lovely niece, Janice Marsh, and though he feels no remorse against stealing Hargrave’s diamonds, he does draw the line at cheating on his future bride.
As the story unfolds, we learn that the mysterious woman is a member of the Brotherhood of The Spider, an equally mysterious group of criminals that are operating in America. The members of the gang are called spiders, naturally. They are ranked by colors; for instance, the criminal lieutenants are green spiders, while the group leaders are gold spiders.
The Spider murders Hargrave, and captures both Captain Galt and Janice Marsh, and takes them aboard his private yacht bound for the Bahamas. But Lura Tellaire really loves Captain Galt by this time and helps him escape. As they have distanced themselves from the yacht, they look back and see the Spider standing on the deck of the ship as the vessel explodes.
We have this description of the Spider: the man who stood there with arms folded on his breast was tall and heavy, yet he was not fat. He had a huge, noble head in which deep-set eyes burned with a peculiar glitter that seemed half insane. His hair was black, his skin dark, his face solid, reflecting tremendous will power. There was cruelty in the mouth, power in the chin, ruthlessness in the hawk-like nose. The small room in which they now were made the Spider seem a towering giant. He turned and faced them. His only emotion reflected in the increased glitter in his eyes.
Needless to say, if there was going to be a sequel, the Spider had to survive the explosion on the yacht. And remember, in the first story Gary Galt had watched the brooding figure of the half mad villain lighted by the glare of the burning ship. He had seen it a split second before an explosion had sent the vessel asunder. He could have sworn the Spider had died in that instant.
The plot of Spawn of The Spider was deep, but not complicated. The villain was a super criminal who had gathered the beggars together under one leader, one master plan. The beggars were pushing drugs in their guise of selling pencils on the streets. The Spider had used his own sister, Lura Tellaire, to get close to A. P. Hargrave. Vengeance and fortune were at the bottom of the affair. Hargrave had married Lura, and that night the Spider kills him so his sister will inherit Hargrave’s fortune. To complicate matters, Lura was really in love with Captain Galt, who loved Janice. 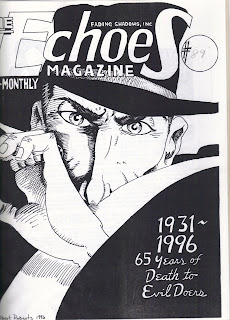 To further complicate matters, Galt’s old boss, Hugh Jeffrey, the Secret Service chief of the Middle East division, wants Captain Galt to return to the Secret Service. He refuses until one of his old friends in the Service is brutally murdered by the Spider. This gives Captain Galt incentive to run the Spider to ground, so he plays along with Lura until he weeds out the identity of the Spider.
This was a very nice entry, but should have been twice as long as it was. There was too much in too short a story, but a topnotch yarn, regardless.
In the second story, Spider’s Return, March 1934, a number of strange crimes have occurred; a trench digger is stolen, as is a diving bell, and gas masks! Naturally, Gary Galt believes the Spider is back, which indeed, he is. Hugh Jeffrey still wants Galt back with the Service, and meanwhile Gary Galt and Janice Marsh are preparing for their wedding.
So we automatically know there is going to be complications. Naturally. The Spider hates Captain Galt, and desires justice for himself. This should make for an equally interesting story as the first one, but unfortunately it only moderately lives up to Spawn of The Spider.
After a lot of action, Gary Galt figures out the Spider’s scheme. It appears that this dastardly villain plans on robbing the National Gold Reserve by tunneling with the trench digger, using the diving bell under water, then breaking into the place through an outer wall below ground that is protected by a poisonous gas. Simple.
Fortunately, or unfortunately, depending on how you look at it, the Spider is killed during the battle for the gold. Or at least I haven’t heard about a third story in the series yet – though anything is possible. For whatever it means, it appears that Galt is back with the Secret Service at the end of the story. But he is taking some time off to marry Janice Marsh. I guess they will live happily ever after.
Tying up the loose ends: How, you may ask, did the Spider survive the explosion on the ship in the first story? That is a good question. However, we are merely told, in one short paragraph, that the Spider had merely remained in the water after the ship went down, until a fishing boat picked him up. Never forget, in the pulps anything is possible. Remember Doctor Death? Nothing seemed to kill him.
Surprisingly, there were more than one Spider in the bloody pulps, even though Richard Wentworth was undoubtedly the most popular, and best remembered. For instance, there was the Johnston McCulley novelettes that ran in DETECTIVE STORY MAGAZINE in 1918-1919. For more information on this character, those interested should read The Other Spider by Robert Sampson, ECHOES SPECIAL ISSUE, June 1982.
One item that shocked me when I read Spawn of The Spider was that the author used the spelling of okay as okeh. Of all the pulp stories I’ve read until now, I had only ran across this particular spelling in stories written by G. T. Fleming-Roberts. To my knowledge, Frederick C. Painton is a real person, so this gives us researches a warning not to rely completely on certain phrases, spellings, and quirks in identifying authors. We could be surprised in the end. There were Okeh records that produced jazz music, I believe.
Finally, my thanks to Will Murray for suggesting these two stories for my research, as well as providing them so I could read them. If the readers are interested in these two fascinating stories, they are available to the pulp fans as they have been reprinted in BEHIND THE MASK, a companion publication to ECHOES. The stories appeared in issues 17 and 19, respectively.


Happy reading.
Posted by Tom Johnson at 6:57 AM 2 comments:

Email ThisBlogThis!Share to TwitterShare to FacebookShare to Pinterest
Labels: 1933, Behind The Mask, Echoes, Frederick C. Painton, Of Other Days And Other Spiders, The Pulps 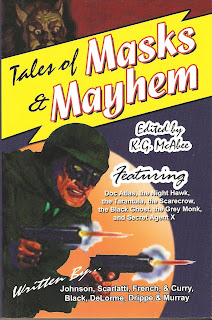 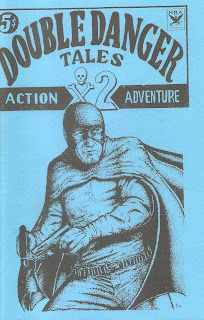 Therese Drippe (Dagenais): Therese was still a teenager when she got involved with our FADING SHADOWS magazines. Her mother, Colleen Drippe was already writing SF stories for our magazines. Therese has an abundance of talent, both as a writer and artist. I believe we used some of her art in our magazines, in fact. She and Tom coauthored a Black Bat novelette, Crimson Harvest, which first appeared in DOUBLE DANGER TALES #31 (September 1999), then again in TALES OF MASKS & MAYHEM V #1 (2005). She also wrote a story for CLASSIC PULP FICTION STORIES #40, and DETECTIVE MYSTERY STORIES #8. We are still in touch with both Colleen and Therese. Marriage and family have curtailed Therese’s writing and artistic endeavors, though I believe she has worked on some of her mother’s SF covers. With her talent, I don’t believe we’ve seen the last of Therese. She can still write new pulp stories like a pro, and I bet she’ll be back some day with a real thriller. 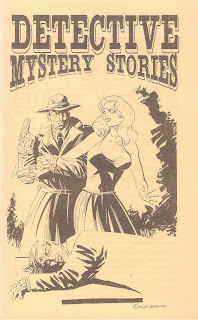