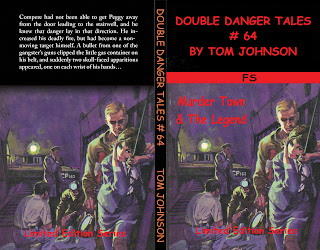 Compere had not been able to get Peggy away from the door leading to the stairwell, and he knew that danger lay in that direction. He increased his deadly fire, but had become a non-moving target himself. A bullet from one of the gangster’s guns clipped the little gas container on his belt, and suddenly two skull-faced apparitions appeared, one on each wrist of his hands. With a slight movement of his wrists, the gas-filled balloons were disconnected and flew from his outstretched arms with a loud hiss, each flying in opposite directions.
The appearance of the banshees was so sudden, gangsters turned their fire on the two escaping gas balloons, and Compere accounted for another four hoodlums as their guns had been diverted from him.
Unfortunately, his luck was running out. He heard a light sound from behind, a short sigh from Peggy, and then he felt the cold hard steel of the barrel of a revolver digging into his spine. A vicious voice grunted from behind, "Drop your cannons, friend, or this girl gets a bullet in the head!"
Posted by Tom Johnson at 5:36 PM 1 comment: