January 15, 2016
99 Cent Escape, Volume 5 Bonus!
The brand new Escape, Volume 5 radio set is only 99 cents through January 28th, when you place any order for $25 or more.
* Use Coupon Code 99CentCD for the Audio CD set or 99CentDownload for the download version. 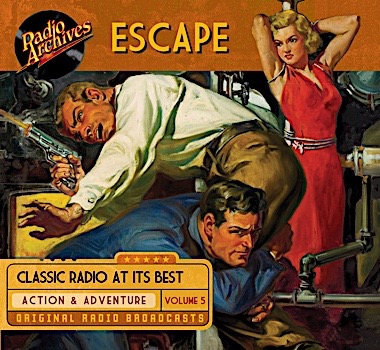 "...designed to free you from the four walls of today for a half-hour of high adventure..."
Movies, not radio, was where one of Escape’s legendary directors; William N. Robson, made his first foray into the West Coast’s entertainment industry. Upon graduating from Yale University, he obtained work at Paramount Studios - where one first screen credits as a writer was for the 1933 movie Private Jones. From Paramount, Robson transitioned in radio at CBS in 1936. Seven years later, he went on to win two George Foster Peabody Awards for his work on the drama series Man Behind the Gun and the documentary Open Letter on Race Hatred. He also produced, along with writing and directing: the Columbia Workshop, Suspense, Escape, Luke Slaughter of Tombstone and Doorway to Life. While Robson would go on to win additional Peabody Awards for later work on radio productions, his professional reputation suffered a bit after being incorrectly identified as a Communist supporter/sympathizer in the 1950s.
While actor William Conrad is perhaps best known as being the voice of Escape, the long running radio series had a total of five different narrators during its almost seven-year run. In addition to Conrad; Eric Snowden, Paul Frees, Lou Krugman, and Gerald Mohr brought the opening narrations of the radio series to life each week. Conrad and Frees are considered by many aficionados of Old Time Radio the best narrators of the series because of their deep-toned inflections helped to give the show additional gravitas. It was Krugman and Frees, though who narrated the final season of the radio show.
Quite a few of the West Coast character actors from Radio’s Golden age that frequently appeared as guest cast members in Escape went on to be the leads in their own radio shows. Among Escape’s guest stars who went on to be the leads in their own radio shows were: Gerald Mohr as Phillip Marlow; William Conrad as Sheriff Matt Dillon in Gunsmoke; Jack Webb as Sgt. Friday in Dragnet; and John Dehner as Paladin in the radio version of Have Gun – Will Travel.
Of the more than 200 episodes originally broadcast, there are but a mere handful of Escape programs that are missing today — wonderful news for the novice listener, as hours and hours of great and rewarding radio drama await. Escape, Volume 5 fully restored by Radio Archives.
6 hours - $8.99 Download / $17.98 Audio CDs
Having troubles ordering from the website?
Call us at 800-886-0551 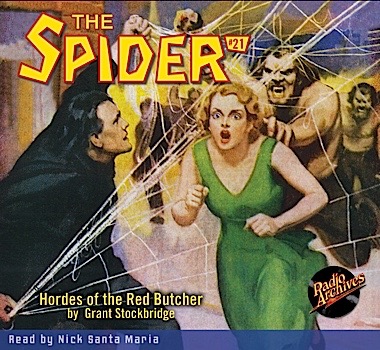 In the gaunt desolation of those dark Kentucky hills, the Dixie Limited, crack flyer, stood gutted of all living passengers... The Spider, the only survivor, stood alone at that bleak scene, vowing silently, solemnly, to destroy the ambition-mad arch-criminal who had plotted this wholesale ruin. For this, and manifold like disasters, were occurring everywhere in the land — at the direction, Richard Wentworth knew, of some diabolical brain which was unleashing hordes of primitive barbarians to lay waste to civilization. But later, at the very moment when the Spider should have struck his most telling blow, he was pacing a narrow cell in the death-house at Sing Sing!
Yet there was a human side to this complex man. Consider his strange relationship with his semi-fiancee, Nita van Sloan. When he had met Nita, his life was already pledged to the service of humanity. The Spider had been a scourge of the Underworld for three full years. So he had fought against the love he knew could never reached culmination in marriage. What man could marry, have a home and children, when death and disgrace hung hourly over his head? No, he could not permit Nita to face such a possibility. He had told her that, long ago, when they found their love was stronger than the will to resist; had told her all his secret life in the hope that it might accomplish what his will had not. It had only drawn Nita closer to him, and they had fought the hard way together.” As Wentworth once remarked to her, “How perfectly is thy mystic karma attuned to mine!”
Nick Santa Maria reads Hordes of the Red Butcher with the crackling intensity you have come to expect of his superb talent. Originally published in The Spider magazine, June, 1935.
5 hours - $9.99 Download / $19.98 Audio CDs 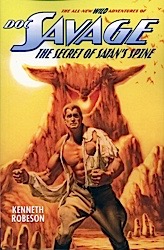 Doc Savage: The Secret of Satan’s Spine
by Will Murray and Lester Dent, writing as Kenneth Robeson, cover illustration by Joe DeVito
When a vivacious blonde convinces Monk Mayfair to skip an important sea voyage to London, and instead run off to her Louisiana plantation, Ham Brooks is very suspicious.
After Doc Savage enters the picture, things start popping. As in fists and guns. Finding themselves on a steamship bound for the Caribbean, Doc, Ham, and a reluctant Monk become embroiled in wartime intrigue surrounding the question of who is desperately trying to keep them off the Northern Star, and why?
From New York City to the Bahama Banks, Doc Savage and his mighty men follow the trail, making new allies along the way, until they plunge into a hurricane of horror only some will survive…. Softcover $24.95 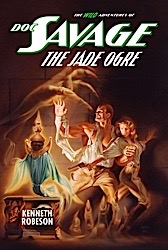 Doc Savage: The Jade Ogre
by Will Murray and Lester Dent, writing as Kenneth Robeson, cover illustration by Joe DeVito
A desperate plea for help plunges Doc Savage into a maelstrom of horror aboard the Hong Kong-bound liner Mandarin, where the depraved minions of the phantom predator, Quon, hold sway. As innocent passengers succumb to the insidious Jade Fever, and ghostly talons pursue Doc’s beautiful cousin, Patricia, the mighty Man of Bronze races to solve a riddle that defies reason.
For deep in the spider-haunted ruins of faraway Cambodia broods a twisted, armless gargoyle with a cold face of jade—The Jade Ogre—whose power to project his deadly, disembodied arms to any place on earth makes him the most dangerous foe Doc Savage has ever confronted! Softcover $24.95 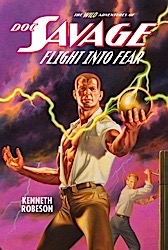 Doc Savage: Flight Into Fear
by Will Murray and Lester Dent, writing as Kenneth Robeson, cover illustration by Joe DeVito
An ultra-secret State Department mission code-named Moonwinx propels Doc Savage from the concrete canyons of Manhattan to the icy black waters of the Arctic sea, and deep into the frozen heart of Cold War Russia in a daring Flight into Fear.
Targeted for assassination by the Kremlin and fated for a confrontation with a nemesis more violent and vicious than any he has faced before, the Man of Bronze must evade a faceless executioner known only as The Red Widow.
What is Project Moonwinx? Will Doc Savage survive to put this all-important plan into motion? Or will The Red Widow sink her poisonous fangs into his throat? Softcover $24.95 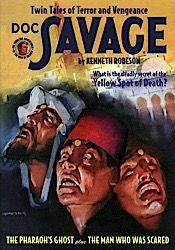 Doc Savage, Volume 85
The pulps' greatest superhero returns in two action-packed thrillers by Lester Dent writing as "Kenneth Robeson." First, after Johnny Littlejohn disappears in Cairo, Doc Savage journeys to the Land of the Sphinx to discover the strange secret behind "The Pharoah's Ghost." Then, the Man of Bronze is accused of murder when "The Man Who was Scared" is killed in Doc's own offices! PLUS a Bill Barnes novelette by Charles S. Verral, a never-published article by Lester Dent and a classic illustrated story from the Golden Age of Comics. This instant collector's item showcases both classic color covers by Modest Stein and the original interior illustrations by Paul Orban with historical commentary by Will Murray, author of sixteen Doc Savage novels. Double Novel Reprint $14.95 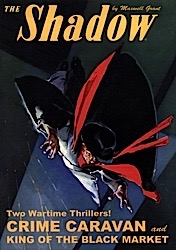 The Shadow, Volume 102
Who knows what evil lurks in the hearts of men? The Shadow knows! The Shadow crisscrosses the country battling thieving black marketeers in two wartime thrillers by Walter B. Gibson. First, The enigmatic "King of the Black Market" endangers the future of our nation at the time of its greatest peril. Then, coast-to-coast car hijackings sabotage the war effort until The Shadow shuts down the subversive "Crime Caravan." Bonus: an Orson Welles Shadow classic from the Golden Age of Radio! This instant collector's item showcases the classic color pulp covers by Modest Stein and the original interior illustrations by Paul Orban, with original commentary by popular culture historian Will Murray. Double Novel Reprint $14.95

The Bargain Basement
Check out all the items at great prices in the Bargain Basement including a large selection of Audiobooks. Supplies are limited.
Comments From Our Customers!
Brian Davis writes:
Thank you for restoring the entire "Chandu The Magician" serial!
Lee J. Rademaker writes:
I wanted to let you know how much I enjoyed the LIE CATCHERS. It is a mystery from a totally fresh point of view! The story was very engaging, and I couldn't change the CD's fast enough! My friend is a Mystery nut and very particular and critical of mystery stories. But, he loved the LIE CATCHERS! Please make more audio books of the rest of the series!
Thomas Kokenge writes:
Since your products are a very big part of my life, and you seem like a really terrific guy, I wanted to wish you and your family the best of the New Year. Your latest newsletter promised great things in 2016 and I am hoping to hold you to that promise. Thanks again for all the listening thrills you have provided!
If you'd like to share a comment with us or if you have a question or a suggestion send an email to Service@RadioArchives.com. We'd love to hear from you!
3 ways to order.
1. Website RadioArchives.com
2. Phone 800-886-0551
3. Email Reply to this email with what you want to order. Payment information will be sent to you.