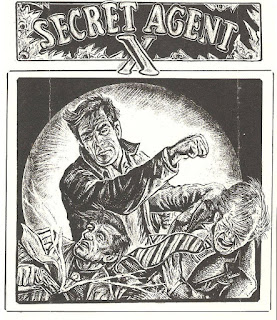 This is the second appearance of The Leopard Lady! In her first appearance, Legion of The Living Dead, Felice Vincart was a typical Agent X adversary, a woman thrown into a life of crime for excitement or adventure. However, now she appears to be the embodiment of evil, using her pets, two savage leopards to kill at her command.
Although again, she is a secondary character in the story, Fleming-Roberts had a way of making his femme fatales shine above the other players in the drama. It isn't the mastermind the reader is interested in, but the Leopard Lady. We don't really care who the mastermind is we just want to follow this girl and her vicious pets.
She is three dimensional, and feels hate - or love. As we see in this scene from Dividends of Doom, when she has captured Agent X:

" I could have loved a man like you madly," she whispered. "But I am easily turned to hate. Now you shall know the agonizing fear of the electric chair, even as I have known it because of you." Her voice seemed very far away now. X could no longer see those tantalizing red lips.
"Goodbye, Agent X," came the distant whisper. Then he knew no more.

When her end came, it wasn't Agent X who killed her, but her boss, the mastermind. Stuart Gray, alias Achmet Karahmud, who was attempting to escape with the loot, leaving the girl behind. The Leopard Lady caught up with him over a burning theater, along a batten for supporting stage drops. Gray tripped her on that narrow batten, and Felice Vincart, the Leopard Lady, fell to a fiery doom in the inferno below.
Thus ended the life of the only foe to face Secret Agent X more than once.
At least in the pulps. I might make a side note here, concerning Felice Vincart. In a story dated December 1996, Steve Mitchell writing in CLASSIC PULP FICTION STORIES as Brant House, wrote a sequel to Dividends of Doom, in which the Leopard Lady survived the burning flames of the theater. In The Choice, she is assisted by Ravenwood and the Nameless One, and turns her life around. A second story, The Leopard Lady Strikes Back, also by Steve Mitchell, appeared in the January 1997 issue of CLASSIC PULP FICTION STORIES, and this time she meets Secret Agent X again, who accepts her change. Unfortunately, that seems to be her last appearance anywhere.


With the new pulp movement, we may not have seen the last of The Leopard Lady yet. Happy reading 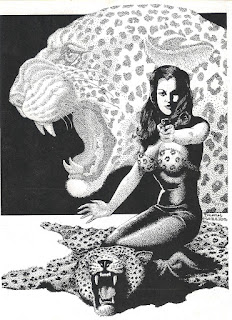