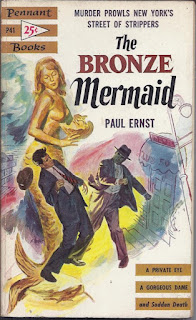 “The Bronze Mermaid” by Paul Ernst. An early paperback from Pennant Books by pulp author Paul Ernst. Ernst was the author of THE AVENGER series under the Kenneth Robeson house name. With the pulp magazines drying up, he moved into the paperback field with modern mysteries. In “The Bronze Mermaid” our protagonist is Sam Cates, an ex Marine now working as an insurance adjuster for Home Protection Insurance Company. Previously, he had handled the case of the home robbery involving the Duysberg diamond and other jewelry. In that case, the police had found the niece of Senator Keppert tied up and gagged, and the safe robbed. Cates investigated, and figured it was an inside job, and believed the niece to be involved, but without enough evidence, the insurance paid off. Now, several months later, Cates is leaving a French café in New York when he spots a young girl walking down the street. She looks familiar, so he follows her out of curiosity. When she enters the Club 50, a run-down nightclub, he steps in behind her, coming face to face with Ellen Keppert, the suspicious niece in the jewel robbery. She accuses him of following her, and then hires him as an escort, and they enter the club. After excusing herself for a few minutes, someone calls the police about a murder, and the girl is again a suspect. Cates finds the Duysberg diamond in his pocket, and knows the girl slipped it in after he had been searched. So the new murder is tied in with the old jewel robbery, and his suspicion of the niece is heightened even more as the number one suspect.  A clue is a bronze mermaid gift from Sea City, a resort and vacation town. I’m not sure how many novels Paul Ernst wrote after the moving from pulps to paperback/hardbacks, but this was a very good modern mystery. Although mystery lovers should be able to figure who the killer is right away, and it lacked the fast, wild action of Paul Ernst’s earlier pulp stories. Still, it was a good read.
Posted by Tom Johnson at 5:05 PM