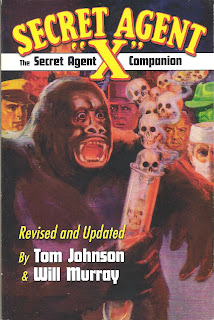 Betty was with Secret Agent Xfrom the very first, although a few novels featured her in no active part, she merely gave the Agentinformation over the phone. However, she was usually right in the middle of his cases, and getting captured, being drugged, put in dungeons and tortured, the usual fate of a pulp female. At least once in every novel, Agent Xwas forced to penetrate a criminal stronghold to rescue the young reporter.Shesaw the Agent's true face for the first time in City Of Madness(December 1936). She remained with the Agentfor another year of the magazine, making her final appearance in the December 1937 issue, titled Plague Of The Golden Death. At that time she was dropped from the series (but the Agentstill finds other fair damsels to rescue).
Betty had relatives in a town named Branford (no State given, but assumed to be New York), an aunt and cousin. The cousin, Paula Channing, is very wealthy in her own right, and popular in the community (City Of The Living Dead, June 1934).
Also important to the series was the love interest for the Agent'stwo aids, Jim Hobart and Harvey Bates, though the two ladies involved were only featured in one novel each, their parts were very important and deserve mention:
Leanne Manners (The Murder Monster, December 1934): Leanne was a red-haired young girl from a mid-western town. The fiancée of Jim Hobart, she was refined and educated (and also a graceful dancer). Agent Xgot her a job at the Diamond Club, where she quickly became the star of the nightclub show. However, she actually had another job there, which consisted of keeping tabs on the mobsters that frequented the club.
Leanne and Hobart were soon to be married, but she only appeared in the one novel and was never mentioned again. However, as Jim Hobart only remained with the Agent for two more years it might be assumed that they did get married and, due to the dangerous work he was involved with, he was released from active service by the Agent. 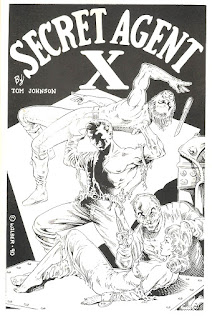 Charlotta (City of Madness, December 1936): Darkly beautiful, her narrow velvety-lidded eyes were almost black and extraordinarily shrewd. High cheekbones accentuated a small, pointed chin. Her rouged lips suggested determination without in any way detracting from her beauty. She wore a short, flared black skirt and the postage stamp apron of a housemaid.
Though American born, nature had endowed her with brains as well as beauty, and she had served Russia in the early days of the war. Her mastery of foreign languages and her love for adventure had enticed her to seek fortune in strange lands at an early age. She later left Russia and transferred her abilities to the French Intelligence Service. Wherever adventure and intrigue could be found, there too was Charlotta.
Harvey Bates fell in love with her (and so did I) in the novel and she returned his love. But after this novel Bates was only active in four more cases and seldom placed in a position of danger. Thus, it might be assumed that Charlotta added the name of Bates to her own - and Agent Xonce again lost another very capable operative.
With Harvey Bates and Jim Hobart gone, Secret Agent Xbecomes a Lone Wolf crime fighter.
Happy reading.
Posted by Tom Johnson at 4:39 AM