The Dealer Of Death 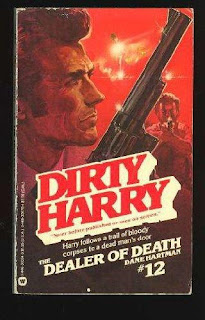 Dirty Harry #12: The Dealer of Death by Dane Hartman (unknown). James William Gallant was arrested and sent to prison by Inspector Callahan, where he spent six and a half years before escaping. Now, his ambition is to cause Dirty Harry problems before killing him. Setting up his own death to make everyone think his dead, he won’t be suspected in crimes now. He steals Callahan’s famous gun and kills several people known to hate Dirty Harry, which eventually leads to Callahan’s suspension from the force. Gallant also ties up with an end-of-the-world survival group made up of paramilitary men with a hideout in the woods. This was actually a pretty good entry in the series, even though not by Ric Meyers. Well worth reading.
Posted by Tom Johnson at 4:43 PM