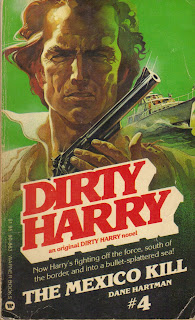 Dirty Harry #4: “The Mexico Kill” by Dane Hartman (unknown author). In order for the author to make the story work, he has Harry make a false arrest on a drug kingpin, which gets him suspended from the force. This is just in time for Harold Keepnews, an extremely rich person, to hire Harry to oversee a crew on a small luxury cruiser sailing to Mexico to get revenge on pirates who captured his previous cruiser and killed all on board. Naturally, Harry is given a crew not much better than the pirates he’s going after, plus every move he makes seems to be known in advance. Could Harold be setting Harry up, or is it his gorgeous wife, Windy working against him? Well, the plot wasn’t too bad, but the carry-through wasn’t very good. Almost as if this was intended as something besides a Dirty Harry in the beginning, but rejected, and turned into this odd entry. In reality it might have worked better as another men’s action novel series. I don’t think it worked well for Dirty Harry. Truth be told, the only stories in this series I seem to like are the ones written by Ric Meyers.
Posted by Tom Johnson at 5:42 AM