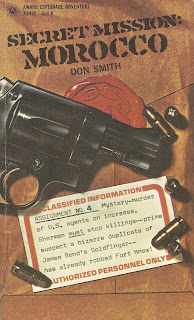 Secret Mission #4: “Morocco” by Don Smith. The author must have read Ian Fleming’s GOLDFINGER, or saw that movie, as this has a similar plot, but takes place in Morocco. Phil Sherman is rear-ended by a beautiful blond following his car. It turns out she’s a US Treasury agent on the trail of Berno Steigender, a European banker with gold fever. He is replacing gold with gold-platted lead in European banks, and hoarding the real gold. He wants to increase gold value many fold. Gail Bancroft wants Sherman to help her find out how – and where – the banker is pulling of his exchanges. He refuses, but then Gail is found murdered, and this sets Sherman on the trail of (I started to say Goldfinger) Berno Steigender. A good men’s action novel, and it kills a few hours. Lots of interesting characters, as usual.
Posted by Tom Johnson at 6:32 AM