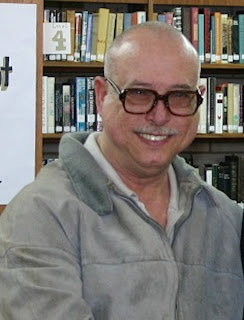 Tom Johnson: Tom was an early pulp fan after discovering The Shadow and Doc Savage in paperback reprints in the 1960s. It wasn’t long before he found the rest of the pulp heroes. Returning from a tour in Vietnam he met a fellow fan that introduced him to Fred Cook’s BRONZE SHADOWS. Tom and his wife, Ginger, were fascinated with the concept of Fred’s fanzine and subscribed to every pulp fanzine on the market until 1982 when they published their own pulp fan magazine, ECHOES, then in 1995 they began a string of fiction magazines that would last for another decade. Over the years Tom has created new pulp heroes, as well as writing new stories featuring the original characters.
Three of those new pulp heroes are The Black Ghost, The Masked Avenger, and The Mind Master.

Tom also researched and wrote histories of such pulp characters as Dan Fowler (G-Men Detective), The Phantom Detective, The Black Bat, Secret Agent X,and The Belmont Shadow (From Shadow To Superman), as well as Operator #5’s Purple Wars, The Green Ghost and The Black Hood. These he published in his FADING SHADOWS magazines. When ALTUS PRESS came along, Marr Moring picked up Tom’s research books and some of his new pulp stories, publishing them in more professional volumes. Tom was also special guest editor for ALTUS PRESS’ Triple Detective series.

Now retired from writing, Tom is enjoying the many new writers in new pulp, and especially their continuing stories in the original pulp series. It’s like a return to the old days to pick up a new Phantom Detective, Moon Man, or Dan Fowler.
Posted by Tom Johnson at 6:41 AM