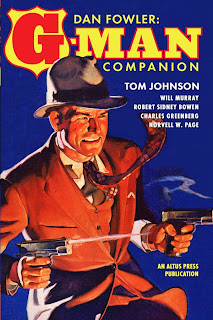 Now available on Altus Press and Amazon. This 414 Page volume contains my research into the Dan Fowler series, plus some new material identifying early reprints. It will also reprint two novels from the series, which Will Murray and I consider two of the best in the series, plus a Fowler novel by Robert Sidney Bowen that didn’t make it for the series. Paperback is $34.95. Hardback edition coming soon.
Posted by Tom Johnson at 11:05 AM 1 comment: 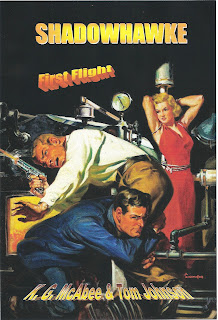 Deposed from her Balkan kingdom, the Spider Lady rules a new kingdom in America. Taking over the New York underworld, she operates from a hidden underground cavern. Those who oppose her are forced into her deadly web. But one man and his fighting team take up the trail to bring justice to the Queen of the underworld. The Shadowhawke!
With the ever-rising cost of pulp-related books, Tom Johnson re-launched his old Fading Shadows imprint to see if it was possible to produce a book for under $10.00. With Gail McAbee’s birthday coming up in November, Tom chose their action-packed pulp story, “Shadowhawke: First Flight” as an experiment. This 128-page (4 x 7) paperback is the result. Printing isn’t cheap, but we’ve eliminated the middleman. With only a few copies ordered for this experimental product, Tom is offering them on a first come basis at $7.95, plus postage. This was not meant for regular sales and is not available on Amazon or in bookstores. Contact Tom at fadingshadows40@gmail.com for ordering information while they last. Available now in very limited supply.
Posted by Tom Johnson at 8:56 AM 1 comment:

Sadly, I was recently notified of the passing of The Pulp Hermit. He was expecting it from the time they forced him into a nursing home, so it didn’t come as a surprise. But the old fella spoke out in defense for the original pulp heroes until he left us. Now that his voice has been silenced, there is no one to take up his banner. Perhaps that is as it should be. It’s time to move on. As for me, I am too busy with my professional career to worry about what is happening in the pulp community. In our last telephone conversation, the Hermit said to me, “If the pulps didn’t die in the 1950s, the amateurs will surely kill them today.” I guess that was the old fella’s final quote. R.I.P. Hermit.

Another Gotham Round Table

Another Gotham Round Table

The Pulp Hermit: I’m happy to see my latest visitors. It has certainly been a long time since you gentlemen were in the spotlight. But since we are all together, I wanted to ask you a couple questions for today’s audience.  Not that the current audience is likely to be interested in your answers, however, as it seems the majority has little respect for you or your opinions. Apparently, The Old Pulp Hermit is a dying breed. But as long as I’m around, I’ll still be speaking out for you guys. After all, you entertained the masses for twenty years, and this current crowd hasn’t been around but a few years, so they are unproven yet. It seems that some think us old timers are against the pulp heroes appearing in other medias, but that is far from the truth. I’m all for you appearing in other medias. So that’s my first question, how do you feel about crossing over to other medias?
The Moon Man: Personally, I think it would be a good idea in certain medias. I might not be so hot on radio, but I would look good in comics and movies. Even a TV series would be nice. Of course, I wouldn’t work very well in modern times, but if the setting was in the 1930s and ‘40s, they could pull it off.
The Purple Scar: I think a comic book would work, but I might be too frightening for kids. And I wouldn’t want to cause nightmares. I’m afraid the current writers would turn me into a monster, and have me killing en mass. No, I really don’t think I would work very well in other medias, except maybe the comic books.
The Cobra: Hssssss!
New Masked Guy: He scares me. Can I move to another seat?
The Pulp Hermit: Those are pretty much my own thoughts. I think we all agree that other medias would be fine, if they fit the character. Some of the trouble we would undoubtedly see, the ones bringing the old characters into new medias don’t really know them, and characters would end up out of place. For my second question, how do you feel about the new writers modeling their new characters after you? Perhaps all of you haven’t been imitated yet, but it looks like eventually all of you will be. Coming up with new characters must be pretty difficult, as most new characters appear to be patterned after you guys.
The Moon Man: I think it’s cool. It shows that we made more of an impression on them than they let on. I just wonder if my imitation will have x-ray vision through the globe?
The Purple Scar: Unfortunately, they will use my mask as my real face, and I will look horrible in their incarnation. But MM is correct, it is a form of praise, though in a round about way I suppose. The truth of the matter, I would rather they create new characters than write new stories about my adventures.
The Cobra: Hsssss!
New Masked Guy: He’s still looking at me with those creepy eyes. Make him stop!
The Pulp Hermit: I agree with MM also. I think it is cool that the heroes are being imitated, and I hope it doesn’t stop. There are some good stories being written, though there may be more crap than good. But I think eventually the bad writers will be weeded out, and we’ll have a strong base of writers and creators turning out stellar action series with well-molded characters. If they don’t weed out the trash, it will hurt them in the long run. Gentlemen, I thank you for this visit, and hope you will come back for another Gotham Round Table discussion soon ... Would someone show the New Masked Guy how to find his way out when you leave.
Posted by Tom Johnson at 7:31 AM 1 comment: